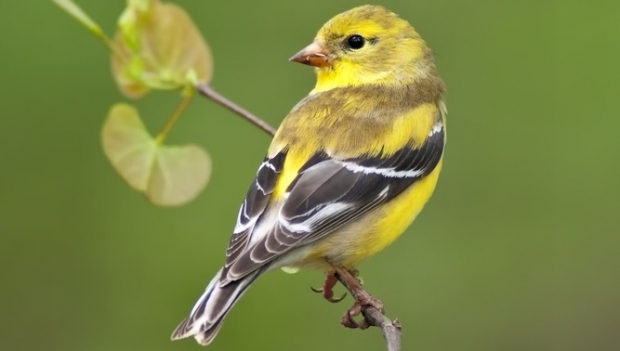 Why does the American Goldfinch wait so late in the year before nesting?

Thistle plants, a major nesting material for the American Goldfinch, blooms in July. It’s thought that the blooming period of the Thistle plant may play a part in the timing of their nesting season. As late summer approaches, these Thistle plants set seed which is eaten by the adults and regurgitated to the young back at the nest.

Although the mating habits of the American Goldfinch began long before the nesting season, breeding doesn’t occur until late summer, generally late July through early September.

The American Goldfinch prefers an open habitat with a few shrubs and trees. They are most likely to be found on farms and in backyard gardens and they remain relatively quiet in and around their habitat.

The female builds the nest using strands of weeds, vines and downy filaments such as the thistle disperses and caterpillar webbing to weave a cup shaped nest. The nest can be so tightly woven as to hold water.

Once the nest is built, both male and female may leave the area. This may give the appearance that they have abandoned the nest, but in a few days they both return and the female begins to lay her eggs. The female may spend up to ninety five percent of her time incubating the eggs, and the male will feed her during this time allowing her to stay on the nest and incubate the eggs for a period of 12 to 14 days.

Typically there will be two broods raised each season. A second nest may be built by her while the male continues to feed the first broods fledglings until they leave the nest in about 11 to 15 days after hatching.

These birds are easily attracted to bird feeders all year by supplying nyjer seed (sometimes called thistle seed) or hulled sunflower seed for them to eat.

When feeding their young, the parents fill their crops with seeds and maybe small aphids or caterpillars and regurgitate them part by part to the young birds. This method allows them to feed each of the young birds each time they visit the nest.

Nyjer seed is very tiny and requires specially designed Thistle Feeders. Be sure to stock up on plenty of nyjer seed to keep the American Goldfinch visiting your backyard feeder while keeping the larger, more nuisance birds, from breaking your bird seed budget.

Click the link below to find out about how native plants can also attract wildlife to your backyard.

Native Plants are Great Additions to Your Wildlife Habitat